This polyhedron was the 91st detailed in Johnson's seminal paper, consequently it's often notated J91, the 91st Johnson Solid. It is an elementary polyhedron that may not be formed from other basic Platonic, Archimedean, and Johnson solids.

Johnson termed the complex of two equilateral triangles adjacent to opposite sides of a square a "lune":

. And recalled that the sequence of 5,3,5,3 is known for appearing on a Pentagonal Rotunda (a.k.a. J6), which is more elementary than the Icosidodecahedron. Therefore the two "lunes" and the two "rotunda" vertices justify Johnson's termonology bi-luna-bi-rotunda for this solid.

Six bilunabirotundas may be used to form the lovely Stewart's 6J91(P4), which may be utilized further to form the central 6-way hole for the fabulous Lunar-holed Rhombicosidodecahedron, Stewart's E5/6J91(P4). 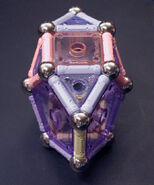 Another View
Add a photo to this gallery

Retrieved from "https://geomag.fandom.com/wiki/Bilunabirotunda?oldid=5388"
Community content is available under CC-BY-SA unless otherwise noted.