Geomag realization of a large Stewart Toroid, named in the spirit of Stewart's Drilled Truncated Dodecahedron, which inspired this model. The original Drilled Truncated Dodecahedron has pairs of triangular faces (where the edges of the pentagonal cupolae meet) that have a too-small-for-geomag angle between them. This model inserts a square between those steeply-angled trianges so that the geomags can handle it. Additionally the original Drilled Truncated Dodecahedron has too-small-for-geomag angles between triangles where the internal edges of the Pentagonal Antiprisms meet. This is solved for this model by the insertion of a square between these two triangles as well. The widening squares are added in parallel corresponding positions to both the inner and outer shells, so that the distance between the inner and outer shells is maintained, meaning they can still be connected by Pentagonal Cupolae with attached Pentagonal Antiprisms. Thus the polyhedra in the inner and outer shells are modified from those in the original design to those in the list below.

Stewart referred to the drilled truncated dodecahedron as the jewel in the crown of the toroids, and this model has the same beautiful property that it is composed of squares and triangles, and yet pentagons are in its structure.

The white triple triangles (plus the three surrounding/connecting metallic blue rods) are supposed to be hexagons, but I don't like to use the rhombic geomag panels to make hexagons -- they end up too floppy and fragile. I ended up leaving them unpanelled, leaving places that are easy to open up to view the true interior of this Toroid.

This Stewart Toroid is composed from the following parts:

Thanks to Karl Horton for the inspiration to explore geomag constructions of (or inspired by) the Drilled Truncated Dodecahedron.

Try wall-eyed stereo (not cross-eyed) with the following two attempts at stereo pairs: 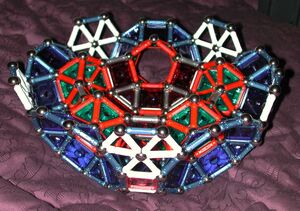 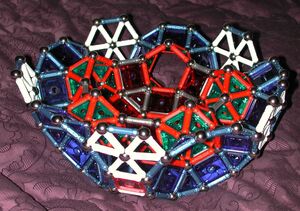 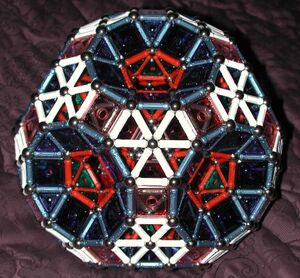 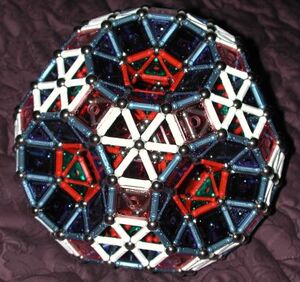 The Drilled Truncated Icosidodecahedron from inside: 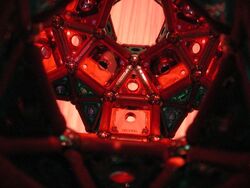 Retrieved from "https://geomag.fandom.com/wiki/Drilled_truncated_icosidodecahedron?oldid=5868"
Community content is available under CC-BY-SA unless otherwise noted.