There's a French architect called Alain Lobel who has spent more than a decade studying and cataloging the ways that a flexibly connected net of equilateral triangles can be used to build practical structures.

I came across him because a guest left a comment on one of Rodrigo's (rveas) structures over on flickr.

Hey, we have a way of building just such a flexible net of triangles, don't we?

Lobel's web site is at: http://www.equilatere.net and the text is in French and English.

At first I didn't believe that these structures would work: they appear preposterously flimsy, but I now think I'm wrong.

Today I built one of the dimpled C6's as a dome, and built a fully enclosed plio.rayf.rivf.60N60P4.C6 link which, incredibly, is rigid.

I'll try to help your intuition out here: as you probably know if you build a "fishing net" made out of just trianges, it is a flimsy affair. You can pick it up, and drape it over your arm, but it's so obviously unstable that when you look at the architect's diagrams of a Lobel net you assume that its stability must come from some external support. 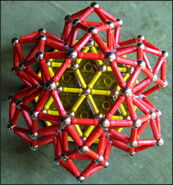 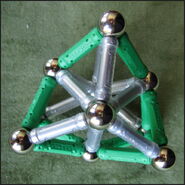 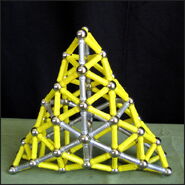 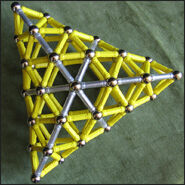 C6 closed form size 4
Add a photo to this gallery

The 'trick' is in the subtle way that the positively and negatively curved vertices nestle together: think of an egg box.

I predict that Rodrigo is going to be pretty excited about these structures: I haven't yet tried any big nets ....

Retrieved from "https://geomag.fandom.com/wiki/Lobel_Frames?oldid=4045"
Community content is available under CC-BY-SA unless otherwise noted.