It is unusual becuse each of the six openings is a lunar complex, rather than a single face, giving to the tunnels a novel, slit-like appearance.

By "lunar complex", Stewart is referring to a "lune", which Johnson defines to be:

WARNING: The pentagons only barely almost-fit in the outer shell of this model. That's because you can't comfortably fit a Geomag pentagon panel into the base of a pentagonal pyramid -- the angles are too extreme. For the pictures I took, I only put in the 4 visible pentagons, and then didn't breathe too heavily as I took the pictures, lest they pop out. If you look carefully at the pictures, you may be able to see that the pentagons stick out more than they should.

The inner portion of a lune (inside the 6 outer rods and 6 spheres) is:

Subtracting 6 inner lune portions from the totals above gives the "6J91(P4) Hole Subtotal":

Now let's add the "alpha" parts (see Image #3 below) . We need to add just "top part" of the alpha: the clear panels and silver rods and central three spheres for each alpha. Each alpha resides above three pentagons of the 6J91(P4), and shares those pentagons with no other alpha. An alpha top part contains:

Additionally, 12 pentagons (representing the pentagonal pyramid in Image #3 below) must be added.

Therefore, the overall total must be the "6J91(P4) Hole Subtotal" plus 8 alpha top parts and plus 12 pentagons: 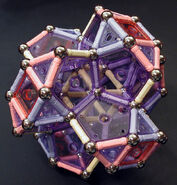 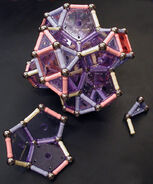 1. Add panels above these places

2. Shape of parts of outer structure to add
Add a photo to this gallery

0. Start with a completed Stewart's 6J91(P4) which will become the central hole for the new model. It's fine to have the central cube in the middle (yellow rods in the picture), if desired, because the holes are actually large enough for the cube rods to be removed later!

1. First, think about how the panels of the outer rhombicosidodecahedral shell will fit over the 6J91(P4). This picture highlights representative parts of the 6J91(P4) that will have new polygons above them.

2. Those representative parts are shown with the polygons that will be built above them. Note that none of the triangles on the sides of the larger object and none of the clear triangles in the smaller object will make it into the final model. 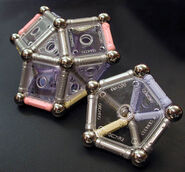 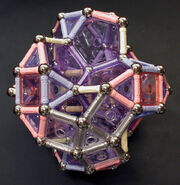 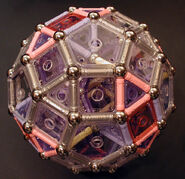 5. The outer rhombicosidodecahedron is filled in.
Add a photo to this gallery

3. A close-up of the added parts. It is only the clear panels that will be added, minus some of the side triangles in these figures. Name the larger of these two objects "alpha" for ease of reference.

5. The adding of all the 8 alpha top parts and the 12 pentagons (from the pentagonal pyramid) is completed. WARNING: As previously mentioned, the pentagons don't really fit in this model. You may want to postpone adding them. I only added the few pentagons visible to the camera, just before photographing the model. I do think they add to the completed look of the model, and enhance the understanding of it. 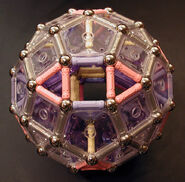 8. Extreme Close-up
Add a photo to this gallery

6-8. Remove the panels in the outer lunes of the 6J91(P4) hole. Leave the extra rods in place (temporarily) to provide an interesting structure as one peers inside the model. The result is Stewart's E5/6J91(P4) with reinforced holes. 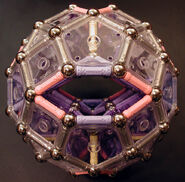 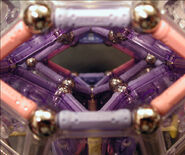 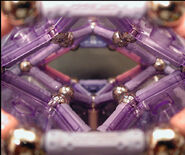 11. Extreme Close-up
Add a photo to this gallery

9-11. The internal rods in the outer lunes of the 6J91(P4) hole are removed, and the yellow rods of the central cube are removed by reaching directly inside. The E5/6J91(P4) model is complete!

Peter Jepsen built versions of this object (he credits Michele Grisoni, who works for the Geomag company). In these models the problematic outer pentagons are skipped.

Thanks to Karl Horton for pointing out these links.

Retrieved from "https://geomag.fandom.com/wiki/Lunar-holed_Rhombicosidodecahedron_E5/6J91(P4)?oldid=5411"
Community content is available under CC-BY-SA unless otherwise noted.