The Platonic solids are convex polyhedra with equivalent faces composed of congruent convex regular polygons meeting at equivalent vertices. They are sometimes also called the regular solids or regular polyhedra, although some authors use this term to refer to more a more general class including the Kepler-Poinsot solids. There are exactly five Platonic solids (Steinhaus 1999, pp. 252-256): the cube, dodecahedron, icosahedron, octahedron, and tetrahedron, as was proved by Euclid in the last proposition of the Elements. 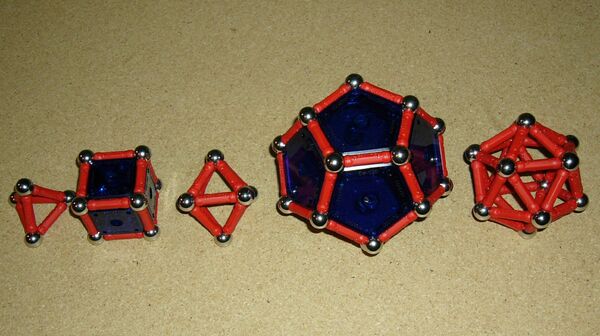 Another Set of Models Edit

I made this set of Platonic Solids to display early last year, and they had graced my living room since then. It was finally time to disassemble them, so I took a picture to immortalize them before they were gone. I made this set from the dark brown rods and lovely wood panels from the Geomag Earth series. 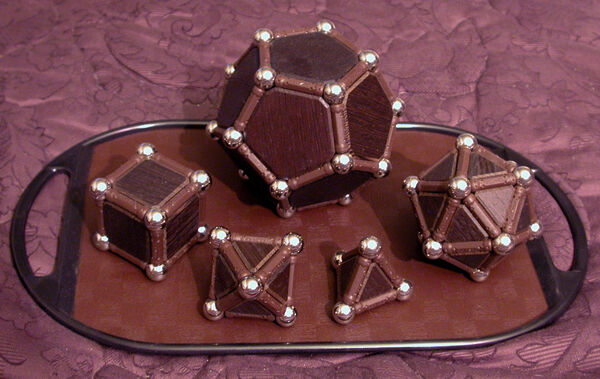 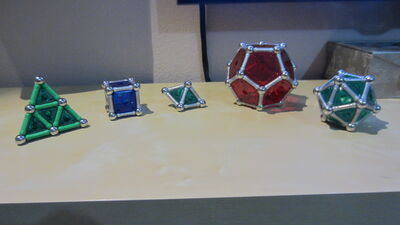 Retrieved from "https://geomag.fandom.com/wiki/Platonic_solids?oldid=6392"
Community content is available under CC-BY-SA unless otherwise noted.