The Prism-Expanded Dissected Cuboctahedron is a Stewart Toroid that has a convex hull, but not all faces of that hull are regular.

This particular toroid was discovered by Alex Doskey, which he named the Prism-Expanded Dissected Cuboctahedron. He explains the process used to create this polyhedron (and other "Doskey Toroids") on his Prism Expansions page. The name is derived by starting with a "dissected cuboctahedron", which is the cuboctahedron dissected into 6 square-based pyramids and 8 triangle-based pyramids (tetrahedra). Alex Doskey notates this dissection as B4 ≈ 6Y4 ⊕ 8Y3. The pyramids from the dissection are then separated from each other by one unit length, then a triangular prism is inserted between each pair corresponding faces (for a total of 24 prisms inserted).

For another description of this dissection, see Jim McNeill's Dissection of the Expanded Rhombic Dodecahedron page.

So, to summarize, this object may be composed entirely from:

One can view a mathematical construction of this object by starting with the skeleton of a rhombic dodecahedron (just the edges, not the entire solid). For every edge in that skeleton, attach the square:square edge of a triangular prism, with the prism aligned away from the skeleton. Then fill in the spaces between those prisms wtih square-based pyramids or triangle-based pyramids (tetrahedra) as appropriate. There it is!

Using this composition, the numbers of rods, spheres, and panels may be quickly totalled:

Equivalently, the object may be considered as: 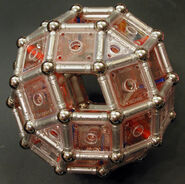 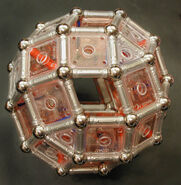 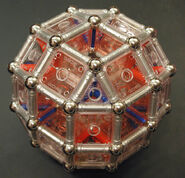 Third View
Add a photo to this gallery 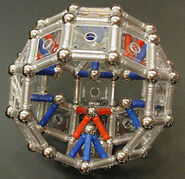 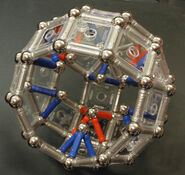 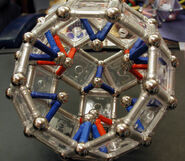 Close-up View
Add a photo to this gallery

Try wall-eyed stereo (not cross-eyed) with the first two images below (although they both may also be viewed individually at higher resolution). 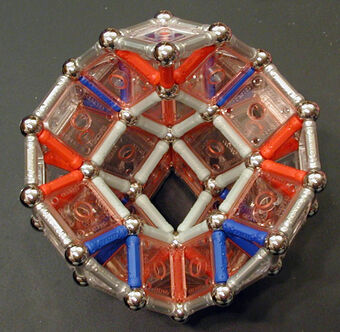 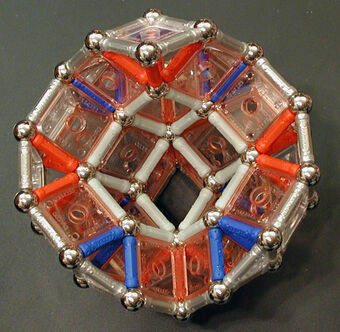 Retrieved from "https://geomag.fandom.com/wiki/Prism-Expanded_Dissected_Cuboctahedron?oldid=5872"
Community content is available under CC-BY-SA unless otherwise noted.