To make a sphere is easy (any of the truncated icosahedra will do), but how to make a torus?

I used a small icosahedron as starting point, and bent it open at two pentagons having a common edge. This gives what we can call a decapod, with 10 legs in green, and let us call the common edge its nose (indicated in blue). These are the building blocks to build tori. The part counts are thus easy: for each decapod in the design, use 30 rods and 20-2=18 balls.

My first attempt was to connect these decapods alternatingly, having the noses slightly up, then slightly down. This leads to exact closure with 6 decapods, and gives a basically hexagonal torus.

These tori can be connected as regular hexagons, making a whole network possible. The principle is demonstrated well enough by connecting two or three, see pictures below.

The hexagonal nature of these kinds of tori is displayed more clearly by adding extra segments, as in the final picture. 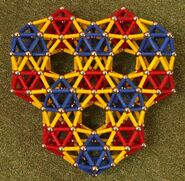 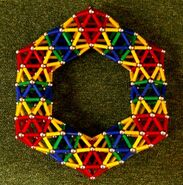 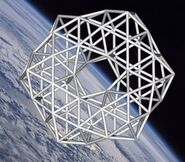 in space
Add a photo to this gallery

But if you connect the decapods alternatingly relative to a circular reference line, you get a torus consisting of 10 decapods, with a 10-gon internal ring, and a 20-gon outer ring. In the pictures, the inner and outer ring are denoted in blue. (Be warned: the coloring now does not correspond to the decapods, I did not have enough reds...)

However, these rings are not planar, as you may see from the Side View. 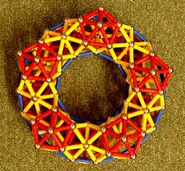 When working on the Diamond, I found a smaller torus. It is perhaps a bit too small, the inner tube is not more than one triangle wide, but these tori can be attached in 4 directions (which is how they are the building blocks of diamonds).

The construction is simple: start with 6 octahedra, and connect them using zigzags. The building blocks again are not in a plane, but have 3m symmetry.

It appears possible to chop off the tops of the octahedra and still get a mathematically rigid torus. 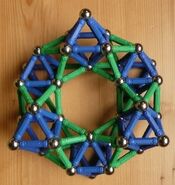 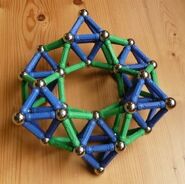 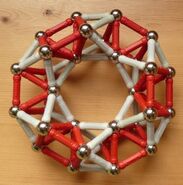 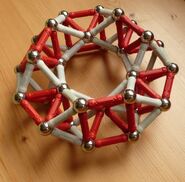 Chopped: Side view
Add a photo to this gallery

After seeing those tori with pentagonal and triangular cross sections, is there one with a square cross section?

There is, and Peter Jepsen had found it already. In this case, the 'pods' are octahedrons, but with one of their vertices split, and the connections are double zigzags. Because of that, all the corners lie in a plane, and there is a true six-fold symmetry. An alternative way of viewing this is a hexagonal (green) prism split by (red) extensions.

The structure appears to remain stable when the protruding pyramids are removed from the octahedral nodes, making it more toroidal looking.

Pyramids removed
Add a photo to this gallery

Is this still a torus? It has tetrahedra as its nodes, connected in zigzag fashion forming octahedra. The cross section is triangular. The faces arrange in flat patterns, which is rather inelegant. 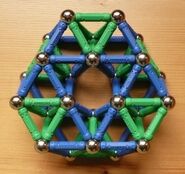 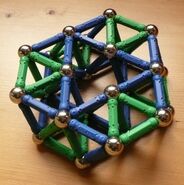 Retrieved from "https://geomag.fandom.com/wiki/Tori?oldid=6013"
Community content is available under CC-BY-SA unless otherwise noted.